As TAKEN's release date approaches (just barely a month now!), I'm answering the So what's your book about? question more and more often. (Thank goodness for one line pitches.) The ever-popular follow-up question--How did you come up with that idea?--is a bit harder for me to address.

Some stories are born from what if scenarios, while others are sparked by dreams. Some are retellings or re-imaginings of existing literature. And then there are the stories that just seem to fall from the sky, directly into your lap. 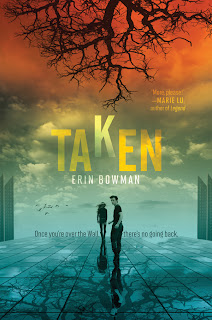 TAKEN was one of those stories.

To be honest, the story didn't fall into my lap so much as TAKEN's protagonist, Gray, did. One moment I was revising a separate manuscript, and the next this boy was wandering around my head, fearing his eighteenth birthday for reasons I didn't understand. (Not yet, at least.)

I kept trying to ignore him. I was supposed to be revising. I had a huge list of edits and absolutely no time for distractions. Especially not from a boy who wasn't exactly nice. He wasn't downright mean either, but he was stubborn and impulsive and he kept storming around my head, glaring.

I plowed on with my WIP. He kept lurking. Impatient, relentless. When I paused long enough to listen to him, I realized his harsh edges were the product of a pretty grim situation. He had a huge heart beneath the hostility. He loved his older brother and felt like the lesser of two men beside him because his brother was everything he was not--patient, kind, accommodating. Worse still, it was his brother's eighteenth birthday.

How's that a bad thing? I'd asked Gray.

He told me no boy in his town made it a day beyond eighteen. They all vanished. Gone in a burst brilliant light. The Heist.

Why? was my next question.

He told me he didn't know. But he wanted to find out.

Suddenly, I wanted the same.

I tried to fight it. Really, I did. I viewed setting aside my nearly complete manuscript to mess around with something new--no matter how tempting and shiny--as procrastination.

Against my better judgment, I opened a new document. After writing a single chapter, I knew I was a goner. Gray's story was my new project. Revisions would have to wait.

With TAKEN, I was incredibly lucky to have Gray walk into my head so fully formed. His voice was crystal clear, and seeing as the novel is written in first person and I'm (shocker) not a boy, this was tremendously helpful in nailing his narration. Gray showed me everything he knew about his world and then I filled in all the pieces he wondered about. We worked to pull back the mysteries surrounding his town together.

I fear I'm starting to sound like a crazy person, referring to Gray as though he's real. But that's the thing about crafting a novel: writers can't help but end up in these intense, intimate relationships with their characters. By the end of a draft our fictional creations feel incredibly realized. We have conversations with them as though they are sitting beside us. We know their deepest fears and greatest dreams. Sometimes I feel like I know Gray better than I know myself. (Which makes zero sense. We are nothing alike.)

Still, I'm glad he started talking to me. I'm even more glad I listened to what he had to say.

Above all, I'm incredibly excited for you to meet him next month. I'd say he's excited as well, but it's not really true. He's got a lot on his plate at the moment. And, well, you'll see...
Posted by Erin Bowman at 6:00 AM