Elizabeth Fama here! It's with immense pleasure that I unveil the new cover for Monstrous Beauty (Farrar, Straus and Giroux BFYR, September 4, 2012).

I love everything about this. It captures the book perfectly, hinting at the considerable darkness of the story, while showing just how genuinely lovely a mermaid could be to a man—how he and she both might be fooled into risking everything for each other. I especially love the way it almost looks like a painting, and that it suggests historical fiction; I appreciate the fact that an adult reader or a boy reader might be willing to carry this book on a subway or to school; I adore Franny Billingsley's prominent blurb. In fact, it's difficult to convey to you just how happy the whole package makes me feel, other than to say that I find it so compelling it makes me want to read my own book.My sincerest thanks to everyone at MacKids, to Joy Peskin, and to Anne Diebel, the designer. And to Sara, for being such a champion of Monstrous Beauty at every stage.

(Fun trivia: the background of the Monstrous Beauty font is an image of seaweed.)

I admit it. Last week instead of starting a new novel, I browsed online for puppies. I don’t know why. I don’t need a puppy; I already have three dogs. The danger of shopping for puppies, though, is that no matter how much I know that I don’t need one and that I’m just procrastinating, sometimes they are irresistible. 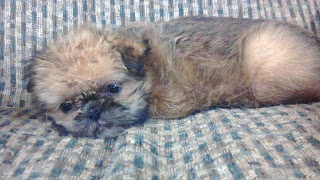 Penelope is like the idea for my next novel. Both are exciting and full of possibility. Maybe this puppy will be well-behaved and not take over my bed. Maybe this novel will be a runaway best-seller and win tons of awards. Maybe I’m completely delusional.

Despite my initial fantasies, as soon as puppy and novel enter reality, they both involve shit. This is not news to me. I’ve had puppies before; I understand potty training. I get Anne Lamott’s “shitty first draft” concept too. The problem is that delusion convinces me that this time will be different; that having written a novel and trained puppies makes me an expert in story and canine behavior; that experience provides an easier road, or at least a short-cut.

However, the truth is that second books (and dogs) not only don’t provide a short-cut, they actually make the road longer and messier. I’ve been dealing with (sort of) polished drafts and trained dogs, so my perspective is off. With the second anything comes comparison. And comparison adds lots of extra shit to wade through.

Somehow, deep down, I must expect to pick up where I left off rather than actually starting fresh. I expect Penelope to lie at my feet and not nip my toes. I expect her to be a cute puppy and a well-trained dog at the same time. I expect my manuscript to be inherently fresh, sensory-laden, and clever the way it is in my imagination. It’s as if the new novel or puppy should understand all that came before them and immediately jump to polished and potty trained, skipping all the in-between work. Instead, everything is immature and underdeveloped—character, backstory and history, level of love and commitment, and bladders—which only leads to frustration.

There is no getting around the mess. If only cleaning up a manuscript was as simple as a roll of paper towels and some Clorox! That’s probably why I opted to start with the puppy before the new novel. The scary part about the second book isn’t what I know or my skewed expectations; it’s coming to terms with all that I lack and realizing how far I still have to go. Will I have something worthwhile to say? Will I have what it takes to pull off another book, a better book? Or will I prove once and for all that I’m a hack?

While I might know a little about crafting stories and teaching dogs to pee outside, I don’t know squat about my new characters or Penelope. I need to start at square one. I need to let go of my egotistical and fearful baggage that only weighs me down and holds me back. I need to watch and listen and learn who these characters are and what they have to offer in terms of story and relationships and truth.

I need to be an old dog willing to learn new tricks.

I need to break out a new roll of paper towels.