45 POUNDS (MORE OR LESS) essentially evolved from a character. I imagined a girl who struggled with her weight and her place in the world. She’s from a typical American family, and by typical I mean atypical. Families today are likely to include step-parents and single parents and gay parents, so I wanted my character’s family to reflect that, too. I envisioned the mother/daughter dynamic to be one of the central conflicts. However, I wanted the main conflict to be within the girl herself. Probably because growing up, most of my conflict was internal.

Here’s where the evolution begins: I have this character, and I feel connected to her. I know her. I've seen her in my classroom, in the park, and in the mirror. But when I started the book around 2005, technology was quite different. In my first draft, my main character spends time in a chat room. (Groan, I know, but hey, it was 2005.) The title of the book was actually her user name: ANN_ONYMOUS. At the time, I thought I was being clever. She felt invisible, and her name, I discovered, was Ann.

My beloved grandmother had recently died, and I’d witnessed her decline from strong matriarch to frail patient needing around-the-clock care. What better way to process those feelings than to have my main character experience them, too? So, in my first draft, Ann’s grandmother suffers a stroke in chapter one, and by chapter three, she’s moved in with the family. It was a chubby-girl-takes-care-of-elderly-grandma story. The more I wrote, the more I fell in love with the characters.

Then I got feedback. A paid critique from an editor at a SCBWI conference commented, “Why should we care about this grandmother who had a stroke? We need to see her first so we can feel Ann’s devastation.” So I start writing back story with Ann and her Gram to get to know them myself. A few years later, I went to Vermont College of Fine Arts, and I got more feedback in workshop. “Does the grandma have to have a stroke? Please don’t tell me she’s going to die. Hasn't that been done already—a lot?” (Keep mind, the feedback isn't verbatim, but that was the gist.) My brilliant advisor, Martine Leavitt, challenged me to ask Ann what she wants. Martine had me write a letter from Ann to her exploring both concrete and abstract desires. That forced me to re-vision the focus of the story.

I spent my second semester at VCFA weeding out old technology, resurrecting a sick grandma, and mining for the heart of the story. The only things that didn’t change were the basic characters. (Well, except for Gram—she got a make-over and a new lease on life.) I revised the manuscript for fourth semester as my creative thesis, and Sara sold it later that year.

Exactly one month from today—on July 11—45 POUNDS (MORE OR LESS) releases from Viking Children’s (Penguin). I can’t wait to introduce you to Ann and her wacky, yet normal, family. I hope you love them as much as I do.
Posted by K.A. Barson at 4:00 AM 9 comments:

Betsy: The Isles of Shoals (Where TIDES Lives) 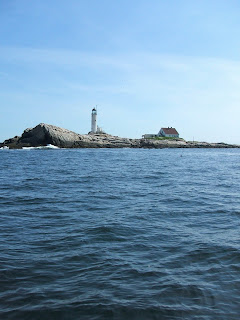 This is where my imaginary friends live.
No—real people live here, actually, in the real house on White Island, at the Isles of Shoals off the coast of Maine and New Hampshire.  But this house, and this lighthouse, are where the main characters in my first novel, Tides (click the link!), live, too.
I grew up in coastal New Hampshire, and I regularly went fishing and duck hunting at the Shoals with my dad, his best friend, Mike, and Mike’s son Corey (to whom Tides is dedicated).  Then, a few summers ago, I got a job on a tour boat that goes through Portsmouth Harbor to the Isles of Shoals twice a day.
Three-hour tours.  The uniform was a red polo shirt and khakis.  I was basically Gilligan.
My job was actually giving the tour: I would yammer into a microphone about the lighthouses and forts and whatnot in Portsmouth, the history of the area, and I’d tell stories about the many eccentric residents the Shoals have seen over the years.  (Notably: the poet Celia Thaxter and the pirate Blackbeard.  No kidding.) 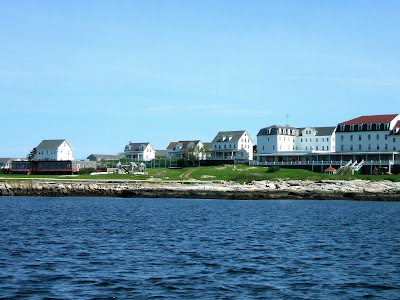 This is the Oceanic Hotel on Star Island.  Lots of shenanigans in the book take place here, notably a dance put on by the hotel staff for all the islands’ residents.   (Tragically, I don’t think this is a real thing.)  Until recently, you had to be participating in a conference or retreat to stay at the Oceanic, but now I believe they take individual reservations.  Who wants to take me there? 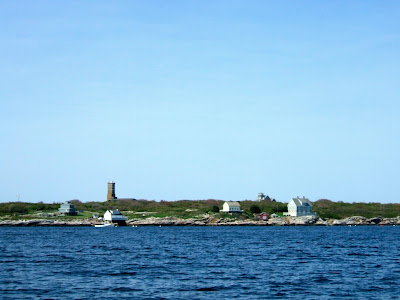 The tower toward the left of this photo belongs to the Shoals Marine Lab on Appledore Island, just across Gosport Harbor from Star.  I always tell people that if I weren’t a writer, I would be a marine biologist or an oceanographer, and I have long wished I had the kind of credentials to get an internship here.  (I don’t think they take creative writers.)  A fictionalized version of the lab is very important in Tides, and that’s all I’m going to say about that. 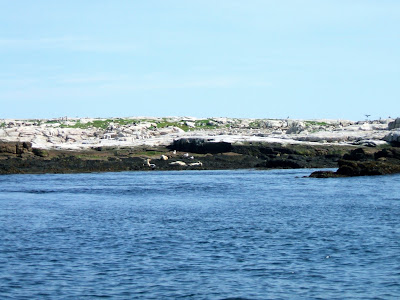 Of course, Tides is really about selkies, and there are real ones at the Shoals.
Well, real harbor seals.  I suppose whether they’re really selkies is up for debate.  But I like to think so.
Can you see them in this picture?  We couldn’t get any closer to the island because of the underwater rocks (or shoals, hey now!  You may have just learned a new word!), so they are small here.
And just for good measure, another picture of Noah’s grandmother’s house and the White Island light.  Every time I’m away from the Shoals for a while, I start getting afraid that I’ve misremembered everything, that it’s not quite as beautiful as the way I see it in my head.  But it is.  I really do love the Shoals, and one of the things I most wish for Tides is that it will help other people love them, too.  But I’ll have to wait and see what you think about that. 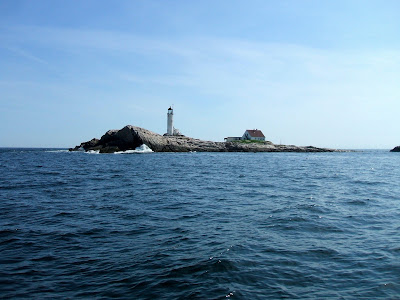