Jeff: The Eleventh Plague (and me) out in the World!

Well, here we are, just a little over a month after the release of The Eleventh Plague. It's been a pretty crazy month with events in Decatur, New York, Virginia and Chicago. Highlights so far?

Sept.1 - Release Day! - My wife Gretchen and I head over to the Barnes & Noble in Union Square and quickly find out that there's a company policy against taking pictures of books in the store. Who knew? Things got a little tense with one very rule oriented B&N employee until Julia Sarcone-Roach, picture book author and and B&N bookseller (below picture at left), swooped in and rescued us. She overruled her co-worker, let us take pictures and then had me sign all their stock. Thanks Julia! 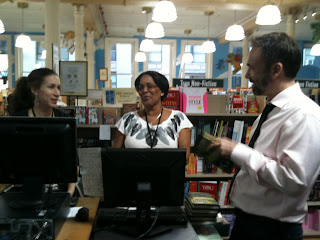 Afterwards Gretchen and I hit Craft for dinner. If you're a Top Chef fan, this is Tom Colicchio's flagship restaurant. The dinner was out of this world. One of the best I've had. If you're in the neighborhood don't miss it! Also made for many good posing opportunities. Sept. 3 - Decatur Book Festival - This was an incredibly well run event in a lovely city. It was in no way diminished by the fact that it was roughly 8 million degrees out when I was here. The highlight was definitely meeting, doing a panel with, and then drinking beer with fellow Crowe's nester Jonathan Maberry. It was quite something for this newbie to see a real pro at work. I definitely made a lot of notes to self while watching him do his thing. 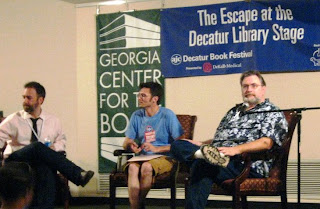 Sept. 17th - Fountain Books in Richmond VA - Headed back to the old hometown for a store visit and my, gulp, 20th High School reunion. The folks at Fountain Books were awesome, very welcoming and super knowledgable. I got to sit around with their also very knowledgable customers and just chat about books. What could be better? I also got to met the delightful Susan from Wastepaper Prose and took what is so far my favorite tour pic yet! 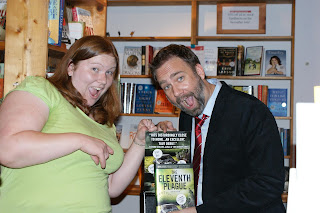 The reunion was good too. Odd, in the way that I imagine any HS reunion is odd, but a good thing to have done. It was pretty amazing looking at all of these adults and seeing the ghosts of the adolescents I knew.

Sept. 24th - Anderson's Book Conference - I was pretty nervous about this one. Not because of the conference itself but because this would be the first time I would do school visits. Guys, I was an assembly. Just me. Turns out I had nothing to be nervous about. The teachers and principals and librarians were amazing and the kids…oh the kids. They were just great. I was lucky enough to talk to a about 150 high schoolers then 200 7th graders and another group of 250 8th graders. They were energetic and interested and super smart. I learned a lot from them about how to do these sorts of things. Mainly, to keep your presentation focused, fast paced and interactive. Also, if the school gives you the option of being up on a stage, behind a podium and talking through a mic? Avoid it if at all possible. I found that it was great to be down on the kid's level and as close up as possible. It seemed to keep it friendly and intimate.

And then at the conference itself I got to do panels with Ilsa Bick and Lisa McCann and meet Michelle Hodkin, Elizabeth Miles and many awesome librarians and book sellers. Also hung out with folks like Patrick Carman, Coe Booth,Sarah Darer Littman and publicist extraordinaire, Lauren Felsenstein. 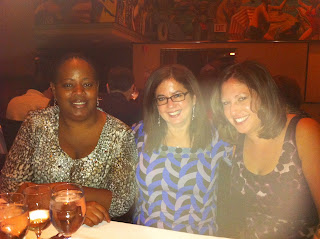 Oh and! In the hotel in Chicago? Dude! TV in the mirror in the bathroom! 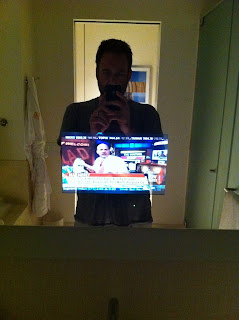 
All in all this has been an amazing month. Couldn't imagine a better way to launch a book! And there's more to come. In the next couple months I'm heading out to Redondo Beach CA, Connecticut, Miami, Chicago and Texas! You can see all upcoming events on my brand spanking new website!

Erin: The Wonders of the World-Wide Web

I signed with Sara back in January of this year. It is now October. We met for the first time, in person, about two weeks ago.

When I mention that I finally got to meet my agent, most people react the same way: "That's so awesome! How was it?"

And exactly the same.

Sara and I have been communicating digitally for nearly a year. Between the phone calls, emails, and tweets, we've gotten to know each other fairly well. (Twitter is the best, though. The amount you can learn about someone in 140-character snippets is truly amazing.)

So when Sara and I met up to chat last week, I asked her how her move went (she'd recently tweeted that moving with a 2yo was actually worse than moving preggers), and she asked me how my WIP was coming (I'd been tweeting about being thisclose to done). We sat down, having never seen each other face-to-face, and continued a conversation that had already been started elsewhere. And later, when I packed up my bag and we parted ways, the conversation didn't end. It picked up again on Twitter (I mentioned that my train was delayed and Sara shot back her apologies).

Earlier this summer, I flew to DC to attend a conference with a bunch of writer friends. Similarly, it was the first time I was meeting them in person. There was not a single awkward moment. It was as if we had all been friends our entire life, and in the way that I can spill a million stories to my old high school buddies after having not seen them in years, we were just picking up where we left off.

The internet has done some amazing things for communities, friendships, and communication in general. Digital conversations and in-person conversations have started to blend together, overlap, weave into one. Maybe it's due to the casual, chatter-like vibe of Twitter, or the on-the-go but still accessible nature of smart phone users. It's probably a little of both. Either way, it is fascinating to see how far technology has come in such a short time, how we can be miles apart and still interact with each other every single day. And so intimately, at that. We get to know someone so well that when we sit down to talk for the first time, it feels like (and is) the 500th.


People talk about "online" friends and "real-world" friends. Sometimes the "online" ones are are dismissed as being less than authentic. Weaker. Frivolous. But the truth is, some of the strongest friendships I've made in recent years are ones that have formed digitally. Friends are friends, period. It just so happens that today's technology makes it incredibly easy for many of these friendships to be forged online.

The internet – Twitter especially – has allowed me to connect with so many people in this industry, people I would never have had the chance to meet otherwise: agents, editors, writers, readers, bloggers, critique partners. Some of these people have become my dearest friends. For that, I am truly grateful.

Next time I'm in NYC, or traveling anywhere for that matter, I'll try to meet up with more of my "online" friends. Tweeting and emailing is great and all, but I can't really share a glass of wine with my computer screen. And unlike avatars, I like how a person can smile back at me.
Posted by Erin Bowman at 5:25 AM 11 comments:

VARIANT by Robison Wells was published on October 4th by HarperTeen. Dan Wells is the author of the I AM NOT A SERIAL KILLER trilogy (Tor), and the forthcoming thriller, THE HOLLOW CITY (Tor, April). His YA debut, PARTIALS, will be published in February by Balzer & Bray/ HarperCollins.
Posted by Sara Crowe at 12:38 PM 17 comments: