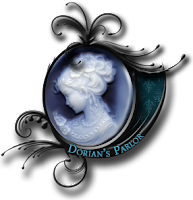 Anticipating the release of a novel, an author might imagine the first sight of the book on a store shelf, the first signing, or the first interview. But I, for one, never imagined reading my book on stage -- in a corset -- to an audience of 200 people wearing steampunk attire.

I was invited to a reading at Dorian’s Parlor, a Steampunk Ball held monthly in Philadelphia. WE HEAR THE DEAD isn’t steampunk, but it’s set in the 1850’s, and Gil Cnaan, one of the organizers, thought the subject would interest Dorian attendees.

The guests arrived that night in lavish costumes featuring top hats, frock coats, goggles, aviator caps, mechanical wings, fangs, dueling pistols … and lots of corsets! Meanwhile, I was suffering from a bad case of stage fright. Climbing on stage, I knew why those corseted Victorian ladies fainted so often! I’m not sure how I convinced my legs to carry me to the microphone, where I stood under a spotlight. The ballroom faded into complete blackness. I couldn’t see anyone, but I could hear them … talking, laughing, clinking their plates and glasses. As near as I could tell, nobody was paying any attention to the stage.

Trying to gather my courage and catch my breath in that blasted corset, I reminded myself that I’d been asked to come as part of the evening’s entertainment. I was there to do a job, and it didn’t matter if anyone listened or not. So I read a passage from my book in a voice that didn’t shake nearly as much as my knees. Ten minutes felt like an hour.

Then, the master of ceremonies invited questions from the audience I couldn’t see. Nothing. Just the sound of people going about their conversations, while I stood on stage quietly dying of embarrassment. Finally, a bold voice called out: “Where did you get your inspiration for the book?”

I knew that voice; it belonged to my 11-year old daughter. (Technically, she wasn’t supposed to be at this 21+ event, but Gil said she could watch my performance as long as she promised not to order any beer.)

That did it. If my daughter could walk out in front of 200 people and ask questions into a microphone held by a steampunk vampire, then I could stand on stage and answer them. I started to relax, and there were plenty of other questions. People had been listening. It was only my nervousness that had me convinced I was boring them all. After I left the stage, I discovered how friendly and well-read the denizens of Dorian’s Parlor were and spent the rest of the evening conversing with the most fascinating (and bizarrely-dressed) array of people I’ve ever met. 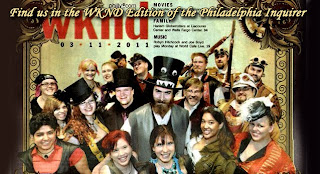 Late in the evening, a fellow in a leather jerkin apologized for missing my reading. “My plane was late,” he said. “Luckily, while we were sitting on the runway, I caught most of your reading on the live pod cast.”

That was the second time I nearly fainted in my corset.
Posted by Dianne K. Salerni at 9:16 AM 15 comments:

My son will be leaving for college soon and the event causes me to pause and reflect upon the many ways we have shared stories over the years. It was difficult to read to him as a young child because he would barely sit still long enough to eat, much less listen to a story. It was ironic that we didn’t do a lot of shared reading until he was a teenager and we read aloud from his honor’s English texts.

One spring he was assigned East of Eden by John Steinbeck and given very little time to read this mammoth book. Between his hectic schedule and mine, it was difficult to find time to read together. One night I was on my way to pick up my daughter and her friend from the gym and my son called to ask if I could come to the restaurant where he worked. He’d cut his thumb and it wouldn’t stop bleeding. I picked him up, then went to the gym, got the girls, went looking for a minor emergency center – none were open – and finally went home to drop off the girls, call the nurse hotline, and assess the damage.

After much deliberation, it was decided that to be on the safe side, a trip to the emergency room was in order. Fortunately, I had the presence of mind to grab East of Eden before we left. My son asked what I was doing and I told him that if we were going to sit in the ER all night, it would be a good time to read. He nodded and smiled and I could tell what he was thinking – What is it about mothers that makes them remember Steinbeck on the way to the ER?
We found a couple of chairs in the hospital away from the blaring television and sick people and started reading. Then we went back to talk to the doctor who tried to decide whether the wound warranted stitches, tape, or Super Glue. I was quite surprised to discover that the medical staff was contemplating using something on my son that I could have picked up at the hardware store. Of course their version of Super Glue was sterile. And about ten times more expensive.
As the doctor left and sent a nurse to clean the cut, my son and I continued reading about the demise of the Trask family and it made me think about how sometimes reading and sharing books is a leisure activity surrounded by hot chocolate and melting marshmallows, but more and more it’s a task squeezed into the “found moments” of our lives… the dentist’s office, a visit to the dermatologist’s waiting room, and of course, those unexpected ER excursions.
This past weekend we had another unexpected opportunity to share a book when we took a mother-son road trip for college orientation. Foreseeing that we would spend nearly 20 hours on the road, I suggested my son take something to read and gave him a pile of books with teen boy protagonists, to which he replied, “I don’t like fiction.”
Those are not words a fiction author ever wants to hear, especially from her son, but I’ve always made it a policy to support his reading choices and never criticize them. I work at a public school as a speech-language pathologist. Most of my students are boys, and most of them hate to read. I go to great efforts to try to connect them to material they will like. Something that will spark their interest and keep them reading. It’s different for every one. Over the years I’ve purchased graphic novels of classic monsters (Beowulf and Frankenstein), non-fiction picture books about famous battles, and comedy classics like Diary of a Wimpy Kid and Captain Underpants.
My most recent novel, Take Me There (Simon Pulse), is about a boy who can’t read or write but dreams of being a poet. He hates books, or thinks he does, because reading is a struggle, but in the end he discovers that books and words can liberate him.

I suppose that’s all I’ve ever wanted for my son, my students… to discover the power of words. So as I was packing, I asked my son, “What do you like to read?”

His answer was philosophy. News to me.

I went back through my shelves and pulled out several books along that vein, not too long, not too preachy. He chose The Fifth Agreement: A Toltec Wisdom Book by Don Miguel and Don Jose Ruiz. As we drove across deserts, into valleys, and through mountains, we talked about what it means to be impeccable with your word, how to go through life without taking things personally or jumping to conclusions, and how a person can live in the world while remaining detached from its negative influences.

The experience reminded me of why I love books and why I’m a storyteller. Books of all kinds, whether they be non-fiction, comedy, romance or history, help us think about what we value and clarify our ideals. We may not always follow those ideals, but books help us know what they are.

While at freshmen orientation, my son registered for classes. Among his choices were astrology, philosophy, and physics. On the way home I asked if he would be interested in a book called Dancing Wu Li Masters by Gary Zukav which combines mysticism and physics. He said he would, so upon our return I immediately went down to the bookstore near my house and ordered a copy. I’m sure it will make a nice addition to his dorm room. I don’t know if he will actually read it with his study obligations, his part time job, his intramural sports, and his busy social life, but it will be waiting patiently on his shelf for the time when he is ready, like a seed waiting for rain, an idea waiting for words, or a mother waiting for a phone call from a son trying to find his place in the world.
Posted by Carolee at 8:44 AM 8 comments:


A quick profile of Beth Potter, prepared by Farrar Straus Giroux BYR for Book Expo America 2011:
Some of the books Beth has worked on: The Children of Crow Cove series, by Bodil Bredsdorff; Edges, by Léna Roy.

Fama: That is the cutest, nerdiest story I've ever heard. Thank you for visiting the Crowe's Nest, Beth P., and for supporting me so unfailingly and so cheerfully these last eight months.
Posted by Elizabeth Fama at 5:56 AM 10 comments: