Peggy: The origins of SKY JUMPERS

Sky Jumpers began in an airplane in 2009. My family and I were flying home from Disney World, on a day when most of the country was covered in clouds. I sat by the window, staring out at the clouds below us, and imagining how much fun it would be to jump out of the airplane and have the clouds catch me. To slow my fall. (Just for the record: clouds will not slow your fall. I recommend you not trying this just to be sure.) The thoughts of what that would be like if it were possible were so exhilarating, that I couldn’t shake them.


And since clouds can’t actually catch you (sigh), I started thinking about what properties of air could change that would make it more dense feeling, and to give it enough substance that it would be able to slow the fall of a person jumping into it. And then once that dense air— the deadly Bomb’s Breath— came into existence, I had to figure out what happened to our world that would’ve caused something as big as that to happen to our environment. The answer was bombs large enough to destroy almost everything, without destroying the land itself. The “green” bombs of WWIII came to be.

From there, I had to pick a location for my story to take place. I have always lived in a valley teeming with life and surrounded by towering mountains.

They are such a massive force in themselves, and have always made me feel protected. Safe. For my book, I wanted it to take place somewhere open and desolate, since it mirrored how the population of the world was— sparse. So I chose Nebraska. An area that’s as flat and open as I could imagine. But for the Bomb’s Breath to be both an asset and a danger, as well as a strong source of conflict, my characters and the town they lived in needed to be at a higher elevation so they could reach it.

So I thought, what could be a more fascinating and ironic place for a town to thrive, than in one of the giant craters left behind by the very bombs that wiped out most of the population?

The diameter of the crater is ten miles wide from mountaintop to mountaintop, so plenty big enough to house an entire town. And just like the valley I’ve grown up in, the crater that the town of White Rock lives in is teeming with life, and those mountains surrounding them, along with the Bomb’s Breath that covers the crater, gives them a level of protection unparalleled for hundreds and hundreds of miles.

And of course, if they’re somewhere that feels so safe, something has to come along to threaten that safety. And it helps if the only way to counter that threat is by going through something invisible and extremely deadly— the Bomb’s Breath.

Sky Jumpers releases in less than six weeks. I am so excited for readers to be able to experience this world that feels so very real in my head, and that I love so much. 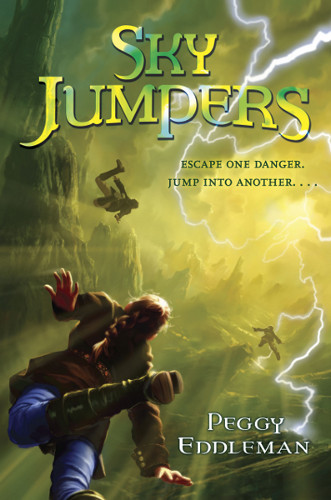 If you would like to learn more about Sky Jumpers (and check out some of the extras), go to peggyeddleman.com.
Posted by Peggy Eddleman at 5:46 AM 13 comments: