Carolee: The Making of a Book Trailer: Behind The Scenes 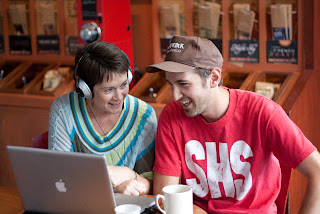 The making of a book trailer can also be a very collaborative effort. I was extremely fortunate to have a talented young man create the trailer for my upcoming verse novel, FORGET ME NOT. Watch the book trailer HERE.

You can find talent in the most surprising places. I found Josh Stuyvesant (seated to my right in the photo above) at Monroe's restaurant where he was working as a waiter while studying film and media arts at the University of New Mexico. I was out with a large group of friends and Josh was our server. While I was busy talking, my husband was asking Josh about what he was studying in college.

One thing led to another and before I knew it, my husband was handing me Josh's phone number and telling me that Josh could make a book trailer for TAKE ME THERE, which had been released a few month's prior.

My husband figured that since Josh was such a good waiter he would naturally be able to produce a good book trailer. Ironically, that turned out to be true. I wrote the script, music, and song lyrics and Josh found musicians, actors, and film equipment. He put it all together on a shoestring budget and came up with a fabulous trailer. Check out the TAKE ME THERE book trailer HERE..

When it came time to create a book trailer for FORGET ME NOT (coming October 2, 2012), I naturally thought of Josh. This time I simply gave him the advanced reader copy. He created the script and storyboard, and then approached his friend Kyle Ruggles about creating the music. Kyle is the male vocal on the sound track for the TAKE ME THERE trailer. Josh then asked his friend, Jesus Ordóñez (who also worked on TMT) to handle photography and Jessica Garrett to take care of makeup.

Next he set out to find a girl who resembled Ally Cassell, the protagonist of the story. That's when he asked Haleigh Chwirka, a friend of his girlfriend, to play the part. Little did he know that Haleigh had gone to elementary school with my oldest daughter and that I had worked with Haleigh's mother at the same elementary school, she as an occupational therapist and me as a speech-language pathologist. It was wonderful catching up with Haleigh at the cast party at La Cumbre and finding out what a wonderful young woman she has turned out to be. Haleigh just finished a teaching degree and will be leaving soon to spend a year teaching English in Thailand. 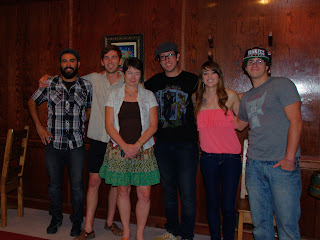 The multi-talented Josh played the part of Elijah, the boy you see running down the street and holding the forget-me-not bracelet. Jeremy Kinter played the Hangman, the creepy guy in the hall, and also served as production assistant. He's actually a very nice guy in spite of his role in this video. When Josh and I got together for the final stages of production, we met at one of my favorite coffee shops, the Satellite, where Jeremy happens to work as a barista. 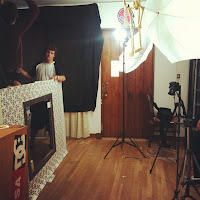 Nate Steinberg played Davis, the football stud. He also helped with set up. He is sort of semi-famous, having played an extra in "The Social Network." His father is David Steinberg, book reviewer for the Albuquerque Journal.

Speaking of forget-me-nots, Josh and I were both distraught to find out that they were out of season. We couldn't even find plastic ones at the local craft store. I went hunting for blue perennials and was lucky to find something similar at the Jackalope. 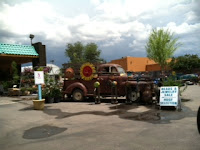 Like I said, it takes a real collaboration to create a book trailer!

These kids all did an amazing job, so if you like what you see, pass it on. Find the FORGET ME NOT book trailer HERE.