Last weekend, I headed out to Albuquerque for the YALSA Teen Lit Symposium. It was an amazing event that focused on the literature. If you are a writer looking for an ALA conference to attend, I highly recommend it. It's less about the ins and outs of running a library, and more about the books themselves, which was particularly great for me as an author and a librarian. I participated on two panels, one on LGBTQ lit, and one on Body Positivity and Fat Lit (incidentally, if librarian Angie Manfredi ever asks you to participate in a panel, say yes -- she is insightful, organized, and fun).

Here I am, pretending to sign a book at the Author Happy Hour: 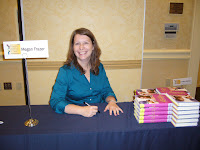 (Yes, dorkiness, thy name is Megan. Thanks to Ruta Sepetys for taking the picture.)


Anyway, now to the meat of this post. The theme of the Symposium was Diversity. This led to many great conversations both in formal workshops, and over meals between sessions. The general sentiment I picked up from both authors and librarians is that we are looking for books where whatever makes the person diverse or a minority is not the whole subject of the books. We -- and the teens we work with -- want books in which people from all different backgrounds are struggling with the same things teens are struggling with in other books: friends, romance, parents, zombies.

This theme came up most profoundly during the Saturday morning panel Commercial Success and Diversity: Are Both Possible, or Are They a Contradiction in Terms? Olugbemisola Rhuday-Perkovich, Neesha Meminger, Cynthea Liu, Alisa Valdes-Rodriguez, and moderator Malinda Lo talked about the pressures they've faced as authors to make their work more or less "ethnic." It's like as authors we're trying to push past the barriers that are in place, but keep meeting resistance. As one panelist said (and forgive me for not taking better notes), if there isn't already a model for success, they don't know how to sell it, and thus they shy away.

It's a fine line, I think, between moving past the standard boxes that people try to put other people and literature into, and ignoring those boxes. Alisa Valdes-Rodriguez said she was taking a cue from television and working in the "stealth Latinos": characters whose ethnicity is pretty much irrelevant. While I understand where she's going with this, something about it didn't quite sit with me. Yes, I want teens in YA literature to have full lives beyond their gender, race, body type, sexuality, or abilities. But I don't think we should erase those things. They shape our characters and make them who they are.

On the other hand, in our panel on the state of LGBTQ literature for teens Malinda Lo spoke about the reactions she got to Ash in which people questioned her choice to create a fantasy world in which homophobia did not exist. She wanted, she said, to write a fairy tale, to allow lesbian readers to experience the simple pleasure of falling in love without the pressures of a heteronormative society weighing it down. This resonated for me: we all deserve fairy tales, don't we?
Posted by Megan Frazer Blakemore at 9:24 AM