Is it worth it?

Book signings can be awkward, even painful. When my first book was published, a bookstore owner advised me not to do any, even at stores like hers where it was doing well:

"The kids just don't come -- we've had really famous people here and no one came for THEM."

So it was with some trepidation that Grace Lin (full disclosure: one of my best friends) baked 80 cupcakes; 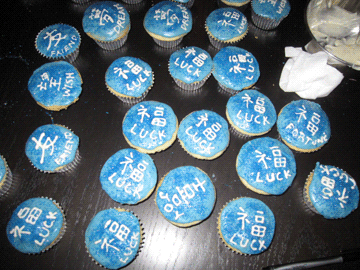 frosted them with the Chinese characters for friend, luck, wish, dream, and joy; 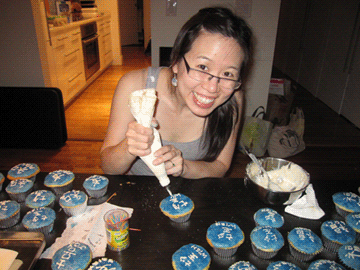 boxed them, and put them in goody bags, 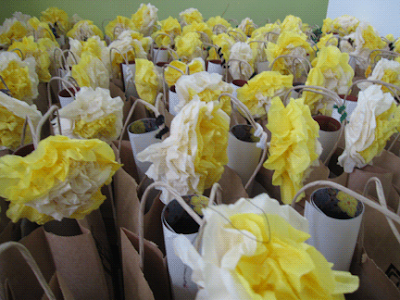 along with home-made paper flowers, a poster of the book, an activity sheet, and -- in eight boxes for eight lucky prize-winners (eight is a lucky number in China) -- Chinese coins. The prize? Your picture or name in Grace's next book.

More than one hundred people came, watched the slide show, 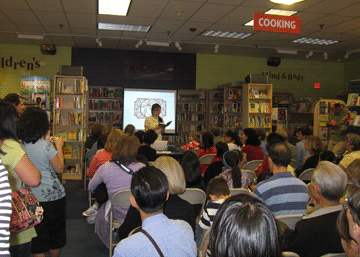 and listened to Grace read a chapter from WHERE THE MOUNTAIN MEETS THE MOON (two starred reviews, so far! And the official release date isn't until July 1!). 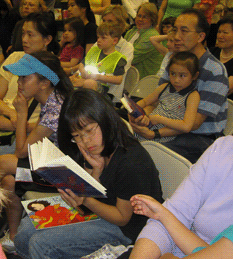 At the end, the kids all surged forward to get the goody bags and (they hoped) find a coin. 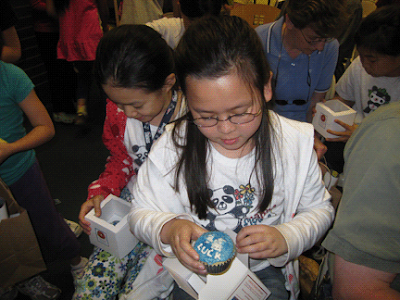 Luckily, there were enough goody bags for each child there: exactly. And the family that had driven five hours to attend the event got the very last one, and one of the 8 coins. 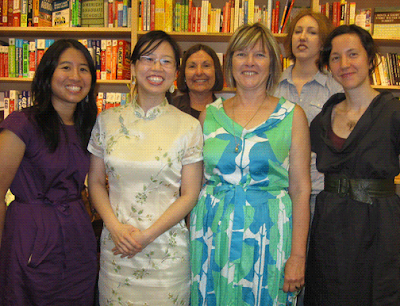 (First row: Alvina, Grace --in moon-colored dress, me, Anna. Behind: Elaine, Meghan)
posed for a picture and then went out to dinner.

Of course, we talked about the event. Was it worth all the work -- and the expense?Grace thinks of her book signings as celebrations -- parties for the people who read her books, a way of thanking them as well as celebrating the new book. She doesn't measure these parties by how many books she sells any more than you'd measure a birthday party for a beloved child by the value of the presents vs. the cost of the party. It was a good party. Yes, people bought books and Grace signed them -- but that wasn't why the answer is YES. It was worth it because we all -- children who love Grace's books, their parents, people who just happened to wander in (there MUST have been some of those but I couldn't tell who they were, everyone seemed so into it all), and of course, Grace's friends, had such a good time. I hope I can approach the next book launch *I* throw with that same spirit of gratitude -- and Grace.
Posted by Libby Koponen at 11:20 AM

Labels: marketing, the writing process, writing as a career