Varian (VJ): What is your typical day like as an editor? Or is there no such thing as a “typical” day?

Stephanie (SE): Each day is a little different, depending on where in the season we are. But I would say usually, I get to work and spend the morning answering emails, returning phone calls, checking over passes and mechanicals, and keeping books moving through the system. I try to get most of the “procedural” stuff done during the morning. Ideally, I then have the afternoon to read submissions or edit. It doesn’t always work out that way, though—it’s hard to get that stuff done in the office, because there’s always something going on, always fires to be put out. That’s why I try to work at home when I’m really behind on reading, because I get more done there.

SE: In terms of content, middle grade is very innocent compared to YA and getting more innocent every day. We’re told more and more that middle grade is a young category, and that every aspect of the story needs to be appropriate for the youngest piece of the category—meaning eight-year-olds. So right now I think there’s a big jump in terms of content between middle grade, where you can’t even really say “damn” or have interest between the sexes except in a really innocent way, and YA, where you can kind of get away with anything as long as you’re okay with being classified as “fourteen up.” : )

Storywise, too, I think you see a difference between YA, where the characters are old enough to be pretty independent and get into trouble on their own, and middle grade, where kids’ lives are still fairly controlled by their parents—and so you see a lot of fantasy and magical realism. In middle grade, I think a lot of the action tends to come from imagination, whereas in YA, it’s tends to be a little more gritty and realistic.

VJ: Similarly, what are the main differences you see between YA and adult fiction? Are any subjects “off-limits” in YA fiction?

SE: This topic is sort of up for debate, but to me, the difference is tone. YA is very in the moment. If you’re a teenager, you are experiencing being a teenager right then, right there—you are making decisions in real time and still dealing with the consequences. Whereas adult fiction about teenagers tends to be more reflective, more “if I only knew then what I know now.”

In terms of what you can get away with, it’s tough—it’s changing all the time. I think we’re coming out of a strange, conflicting period in YA—on the one hand, we’re being told stores and customers want cleaner stories, and on the other, all the other forms of media, like television and movies and even the internet, are pushing the limits more than ever before. So there’s this weird divide: either you’re totally clean or you’re tackling very mature topics, and we’re calling your book 14 up. I think that middle ground where you’re writing about what most kids are realistically going through, messy subjects and all, is getting smaller and smaller. I hope that will change as the culture changes.

I think most of us working in YA fiction have a sense of responsibility toward our readers and our characters, so one thing you won’t see is a story that exploits its characters. I think you can get away with most things—if it’s written realistically and there’s a reason it happens—but when it doesn’t feel like a teenager him- or herself is experiencing it, that’s not a YA book.

VJ: Many adults freely admit that they prefer to read YA fiction as opposed to adult fiction. What is it about YA fiction that makes it “universal”?

SE: I think we all have really strong memories of that time in our lives. And just as stories, I think YA novels tend to be really strong, really compact, and quick-moving; you’re writing for an audience that doesn’t tolerate a lot of throat-clearing. I think that’s refreshing to a lot of people who want a story to really hook them and keep them involved.

VJ: In general, after a novel is acquired, it seems to take anywhere from 12 months to two years for that novel to hit bookshelves. Can you walk us through the life of a typical novel as it journeys from acquisition to publication?

SE: First there’s the task of getting it acquired—doing a profit and loss statement, getting the contract through. Then it’s usually a couple months before we’ll start revisions, assuming we’re not rushing it to make a certain pub date. Depending on the book, revisions can take anywhere from one to six or seven months. We usually go through at least two rounds, starting with the big issues and getting smaller. Then the book goes into production, is copyedited, then typeset; we send out a first pass for authors of the first typeset edition, and that’s usually the last time they see it. Meanwhile, we’re coming up with a marketing plan and making ARCs and sales proofs (jackets to sell from). There’s usually a lull of a few months between the time ARCs are done and the time we start selling in and then getting reviews. Then reviews start trickling in, and ta-da: finished books come in from the printer, and then it comes out.

VJ: I know that Delacorte is closed to unsolicited submissions. How do you find most of your authors?

SE: Most of my authors have come to me via agents, but I’ve also acquired several authors through our contests—we run two contests each year, one for YA fiction, one for middle grade. Sometimes a manuscript won’t win but will stick with me for some reason; I’ll write to those authors and see if they want to attempt a revision. Those manuscripts are often acquired down the line.

VJ: What types of novels do you like to acquire?

SE: I’m really open to anything, but I have a particular affinity for literary novels, funny books, absurd humor, magical realism and historical novels.

VJ: Can you tell us about some of the upcoming novels that you have coming out this Spring?

THE LAST SYNAPSID by Timothy Mason: This is a fantastic, gently humorous fantasy that reminds me of E.T. It follows Phoebe and Rob, two twelve-year-olds in Faith, Colorado, who befriend a prehistoric creature who wanders through a time snag into their town—and needs their help. 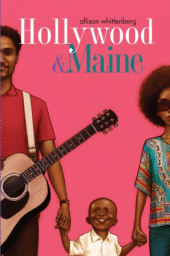 HOLLYWOOD AND MAINE by Allison Whittenberg: This is the companion novel to a novel I bought through our middle grade contest, actually—it was called SWEET THANG. It’s set in the 1970s in Philadelphia, and follows the adventures of fourteen-year-old Charmaine Upshaw as she learns to deal with her first boyfriend and her ex-con uncle, who’s come to live with her family.

BACKTRACKED by Pedro de Alcantara: This is an action-packed time travel book through the New York subway. It’s about Tommy Latrella, whose brother died a hero on 9/11 and he feels like he can never live up to his memory. So he plays a dangerous prank in the Times Square subway system and is hurtled back in time to the early 20th Century, the Depression, and WW2.

THE DIAMONDS by Ted Michael: This is a darkly funny YA novel that reminds me of the movie Heathers. Marni has always been one of the Diamonds, the most popular girls in school—until she breaks the rules by flirting with the ringleader’s ex. Pretty soon her former friends have taken over the school’s mock trial system and use it to try to take Marni down. This has a great voice, and some really smart things to say about civil liberties and what rights we’ll allow to be given away.

For those of you looking for more information about Stephanie, check out her recent interview with Lori Polydoros for SCBWI.

Posted by Varian Johnson at 9:13 PM