Troy: Who should be me? 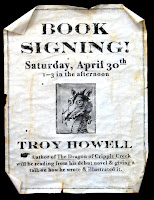 Due to the fact that my voice isn’t particularly audiogenic, has no accent appeal, is low on theatrics, I’ve never been convinced that reading my work to an audience is the most engaging approach for me. I don’t want to bore anyone. At a recent book-signing event where I live, I got a little help from a friend, the girl who represents the protagonist, Kat, in the book trailer for my debut novel, The Dragon of Cripple Creek (Amulet, April 2011).

The portion of text I chose for us to read is where Kat meets Ye, the ancient dragon below the Mollie Kathleen Mine. Since the story is first-person narration by Kat, it was natural that a girl read it. She dressed in character, which included a gold tooth and Denver Nuggets basketball cap. To nudge the listeners’ imaginations, I held up a mask I’d made as I read the parts of Ye.

So, girl meets dragon, they talk, and eventually develop a friendship. But it starts out as kind of a “Who’s on first?” encounter, in Ye’s mist-filled chamber. Here is the scene where the reading began: Kat, who has just seen him, has dropped a gold nugget on her foot.

“No, I said—” I faltered, trying to figure this out. Logic was kicking in, part of the process of going from shock to acceptance. Was it the fall? The lack of air? The mineral water? Here be a dragon. Here be a talking dragon. It wasn’t a crocodile. It wasn’t a horned toad on steroids. He was staring at me at the bottom of a mine. That part was undeniable—the bottom of a mine—but the rest?

Still numb, my mind shifted to auto-answer. “Thanks for the English lesson. But the ‘ye’ is outdated. The ‘ye’ should be you.”

He frowned. “Who should be me?”

With a note of suspicion, he said, “I knew you were eavesdropping.”

“You heard me addressing myself. I heard your scream. I knew you were close. You were eavesdropping. You had to have been: You know my name.”

“I know your name? I heard you cough—”

And so on. We had rehearsed this twice—I read only the quotes for Ye—and it worked. 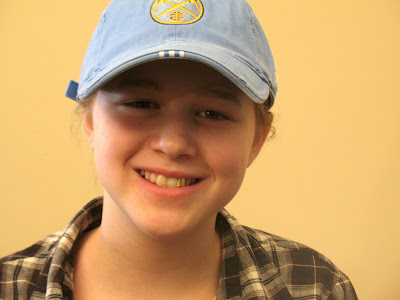 I then enlisted a lot of help from the audience. For this portion of the reading, I chose a chapter that is strictly dialogue between Kat, a talk show host, and several call-in listeners. Audience participation was immediate. Volunteers—eight in all—ranged in age from about six to sixty; most had the book in hand, so I gave the page numbers and the name of the character each person was to play. They got into their verbal roles with enthusiasm. Ahead of time, I had asked another friend to be prepared to read the major role of the talk show host. Her confident reading made it easier for the participants to play their parts. A couple of snippets:

“This is Say-so, and I’m Miranda Bates. My guest today is Katlin Graham, a name synonymous with gold, dragons, and the new Wild West. Hello, Katlin.”

“Yeah. What the”—beep—“so special about dragons? Dragon movies, dragon games, dragon books! All this dragon”—beep—“it’s about the mighty buck! People are makin’ tons of money off any idiot who’ll dig in his pocket—”

“I agree. If you’re talking about the fantasy media-greedia.”

“But that’s just what you’re—”

“All right, Thomas, you’ve had your say. We go now to Boston. Rebecca?”

A regional book representative in attendance remarked he’d never experienced a reading like that.

These approaches would not work for every novel or event—it’s not feasible, for example, to take along a character reader on a book tour—but the next time you’re scheduled for an author reading, you may want to explore the possibilities.
Posted by t howell at 9:26 PM