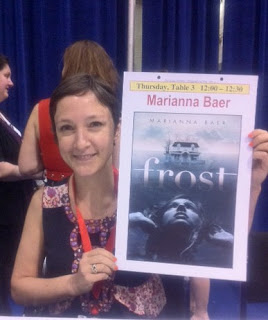 In my post at the beginning of this (my debut) year, I mused that my entry to the world of published authors might require me to enter the world of therapy, too. I’m now picking up the story of my potential mental disintegration with last week’s major development – my first Official Author Event: signing galleys of my upcoming YA novel FROST at Book Expo America.

I was completely thrilled that HarperCollins asked me to sign at BEA. But being my first Official Author Event, it did inspire a bit of handwringing. I couldn’t help but see it as an entry exam to this new stage of life, a stage in which I will occasionally be expected to change out of my writing “clothes” (whatever random ensemble of fabric covers my body enough that I can answer the door for the UPS man) and interact with readers. Yikes!

Admittedly, as exams go, signing at BEA was kindergarten level: all I had to do was sit at a table and write my name a few times.

There were a couple of worrisome x-factors, though:

1. Would anyone bother to get a book signed by an author they’d never heard of, or would I be sitting alone at the table trying not to cry for 30 minutes?

2. If there were people in my line, would I be able to control my hand well enough to hold the Sharpie, and my mouth/tongue well enough to form coherent sentences if I needed to speak? My nervous system has been known to launch sneak attacks during events where attention is directed toward me. All of a sudden, my legs will go so wobbly I can barely stand, or I’ll unleash a moment of babble. So any physical malfunction seemed possible.

My modest goal for the day was to get through it without doing anything to make people think I’d sustained a serious head injury on the way to the Javits Center.

As the signing approached, the fear that I’d be weeping alone next to a pile of unwanted books disappeared pretty quickly. First, agent Sara, editor Kristin, publicist Alison, and marketer Olivia were there to support me. (My own personal entourage!) If worse came to worst, I figured they all could stand on line, multiple times, in identity-disguising outfits.

It became clear that such drastic measures wouldn’t be necessary almost an hour before the signing, when a blogger friend came up to me and said, “I’m seventh in your line!” and pointed to a bunch of people sitting on the floor. After a moment of confusion, I realized the people on the floor were waiting. For my signing. Almost an hour in advance, and they were already waiting to get a copy of my book!?!? (Thank you HarperCollins for the gorgeous cover!!)

By the time I took my seat at the table, there were enough people that I knew I’d be busy for the whole 30 minutes. Fear #1 was entirely unwarranted. Phew.

I uncapped the Sharpie. I figured out what page to sign on. I gave the line-wrangler the go ahead to send the first person up. And as I looked at ALL THOSE PEOPLE who wanted something from me, Fear #2 reared its ugly head. All they need is a signature and a smile, I reminded myself. You can do this. But when the first two people in line both mentioned how nervous I seemed, and I realized I was shaking and saw how chicken-scrawly and unfamiliar my writing in their books was, and all those people were looking at me, well…

Until something unexpected happened. As I read people’s nametags and recognized some names, and didn’t recognize others but saw where they worked or blogged, something clicked. Here, in the flesh, were readers. These people were going to read my book! Suddenly, I didn’t want to sign quickly and send them on their way. I wanted to know who they were! I wanted to talk to them, to ask them questions, to get their blog addresses, to find out where their libraries were…

Because this thing – this whole publishing-a-book thing – it wasn’t just about me anymore. It was about these people who held FROST in their hands. To them, my novel might just have been one more to be shipped home. But to me, this transaction – handing over my book – felt much more important than that. After working on FROST for years, there’s a lot of me in the pages. Seeing those readers holding it… well, it made me feel connected to them in a way I hadn’t anticipated. So I didn’t just sign and smile. I tried to ask every person a question or two; not to fill the silence, but because I was genuinely interested in the answers.

Once I started interacting, the event wasn’t so much about me anymore. And – to my great surprise – I didn’t just survive, but actually enjoyed myself.

I did still have moments of nerves. My hand trembled slightly as I wrote, and I messed up on one reader’s name, right after telling her how pretty it was. (Sorry, Aryanna!) But the experience wildly surpassed anything I’d expected.

I’m sure that not all my author events will go as smoothly as this first one, but I’ll worry about those later. For now, I’m going to file away the therapists’ numbers I’ve been saving since my previous blog post. I won’t be using them. At least, not yet!

Posted by Marianna Baer at 8:25 AM