When I pulled up the chair to my drawing table, to illustrate the cover for my middle grade novel, there I sat competing with myself, having an artist-writer stare-down.

Problem is, I find it easier to depict a scene or a subject with words than with paint.

I wrote The Dragon of Cripple Creek (Abrams/Amulet, April 2011) with no intention of illustrating it, and hardly knew what I'd do for the cover. I had already painted with words—the images were there, waiting to be enhanced by the reader's own vision. I had said all I'd wanted to say.

But books need covers, and logically, since I'm also an artist ...

I believe a cover should read like a premise. It's the book's visual pitch. You get one shot, usually. Setting, protagonist, antagonist, conflict, genre, theme, even voice—some or all of these can be conveyed on the cover, though the simpler the design the more immediate the message. Above all, audience is the primary consideration. Had this been a book for adults, I would have depicted the little scene of Cripple Creek, Colorado, in early lithographic style, with the dragon hovering skyward in psychic distance. But being an MG, it must appeal to that age group, and also appeal to them through the eyes of parents, grandparents, aunts, booksellers.

The story involves the last dragon on earth who's been holed up in a gold mine for ages. A real gold mine—the Mollie Kathleen in Cripple Creek, Colorado. Kat Graham, the heroine, discovers Ye, the dragon, after an accidental fall down an abandoned chute, and consequently triggers the twenty-first century gold rush. Her mishap also endangers Ye and his glittering subterranean Wonderland. In short, it's Calamity Jane colliding with the Reluctant Dragon, and the dragon in turn colliding with our world.

Illustrating a book cover is not a time to indulge the inner artist, though that may happily occur during the process. It’s a time to submit to the needs of the book.

And beyond that, smoldering like a thundercloud at dusk, lay the dragon. He was as tarnished and mythological as prehistory itself. Two gold-leafed wings with silver veins were folded along his back; a scarlet ruffle ran ridge-like between them, into the shadows where his tail was curled; two silver strands hung from his chin; two filaments of smoke rose from his nostrils; two glowing eyes glared into mine. Fire-and-cinnamon eyes. They say that dragons can cast a spell with one look—and I believe it. I was stuck in that stare. If I stepped up and peered into it, I’d see myself trapped like an insect in amber.

My first visuals were simple: a close-up of the girl holding a nugget of gold, and the dragon. (I'm showing one of many here.)

The designer, Chad Beckerman, set a rough layout for type on an altered version of a sketch. 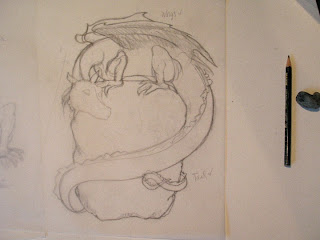 Then I thought of focusing more on one of the main elements (pardon the pun): gold. Gold runs like a vein throughout the book. My editor, Howard Reeves, claims I've created a new mythology about dragons and gold, so I tossed a bigger chunk of gold into the picture. This new idea grew from Chad's version, with a nugget replacing the dragon's head as the central image. Gold represents several aspects of theme within the story, besides being something everyone wants to cling to, so this made sense.

It then became a matter of creating depictions true enough to what I'd already described, though I felt the words still eclipsed any pictures I could conjure up with paint.

The girl was easier than the dragon, and a young friend provided the model. 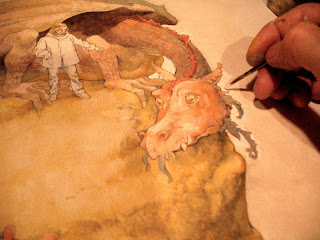 Wanting to stay true to my original vision for the book, which was that of rolling the American West and an ancient dragon into one tumbleweed tale, I aimed for a similar effect for the art and ended up with a stylized version of realism, the kind you’d see on a Buffalo Bill’s Wild West Show poster that features Annie Oakley. And as you delve into the story, my cover decisions become more apparent. Kat’s pose, for example, represents her dilemma: One of her hands is pocket-bound, where she hides not only a stolen chunk of gold but her mother’s heirloom ring, to which Ye has a particular attraction; her other hand reaches out to him in compassion. As for Ye’s looks, he becomes less the stereotypical fierce fire breather after Kat’s first impression, until on further acquaintance you realize he’s a reluctant dragon by choice, becoming the antithesis of greed. A deteriorating nineteenth century wanted poster appears in one of the subplots, so that becomes the cover’s background. I credit the designer for this idea, and an artist friend with the idea of adding faded type. The wanted poster also symbolizes the craze for gold that occurs—everybody wants it—and Kat's world is crumbling; also, the aging dragon's destiny is uncertain. This kind of symbolism is not of course obvious at first glance or even after a studied look, but no matter: It helps convey mood. 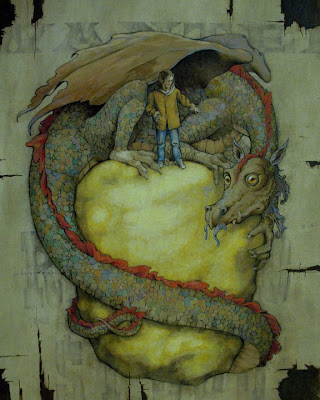 In doing the cover for my own novel, the challenge was to successfully perform the task over again in an externally visual way. You’re welcome to read it and conclude for yourself whether this book can be judged by its cover.
Posted by t howell at 2:31 AM