Last we left it, I was a freakishly private person who adored my cat and avoided the Internet and wrote books for teens, tweens, and people who are younger than that. I am still all of those things. Mostly. But I also Twitter. I did not create a wit-busting handle.

You can find me at http://twitter.com/kristen_tracy

Sample tweet: Researching tween book and found out polar bears are so toxic (PBDEs attack sex and thyroid glands) that 3 out of 100 are hermaphrodites.

In addition to my Twitter birth, since I last reported on my comfort zone, I’ve repeatedly left my house. I even went on tour.

It’s true. This summer I bought some new shirts and went on my first national book tour to promote my teen novel A FIELD GUIDE FOR HEARTBREAKERS. Hyperion-Disney sent me out into the world with Stacey Kade and Brent Crawford and we flipcammed various parts of this experience and posted the footage to Hyperion-Disney’s unRequired Reading Facebook page.

During the San Francisco leg of our travels, I gave them a crazy behind-the-scenes tour of Alcatraz. Seriously. I even took them inside a secret tunnel. (I guess that tunnel is a lot less secret now.)

In addition to the tour, a couple of weeks ago, for San Francisco’s Annual Literary Festival, I performed at the Porchlight Storytelling Series in front of several hundred people. I told a story about my book tour (My story focused on a pigeon that I saw that got run over and killed by two Segways in Washington, D.C. Apparently, pigeons don’t understand what Segways are yet). I was SO SCARED. Somebody told me I made the piano player laugh. I don’t remember any of it.

I also hit the airwaves. Yep. I read a bunch of my poems for KQED Writer’s Block, which meant I got to hear my own voice coming out of the radio and it freaked me out beyond belief. Because I don’t really sound like that, do I?

And I did more radio. I was interviewed by Michael Krasny on his show Forum with a group of women poets. Holy crap! I was scared out of my mind. And before we went live the show’s producer read us a huge list of naughty words we weren’t allowed to say on the air, and after she finished saying the naughty words, I said, “I am very afraid of the direction you think this interview is going to take.” And everybody laughed. But I was serious.

And then, as if I hadn’t done enough, I believe I may have joined a literary movement. I know. I know. It’s been quite a year. I’m part of The Contemps, a group of 21 contemporary authors with books coming out next year. It’s a fantastic group.

Okay. That’s my comfort zone update. Do I miss my reclusive life? TREMENDOUSLY! Then why am I doing this to myself? Because I am a writer. And I’ve come to realize that this means playing on the Internet (a little bit). I try to play for less than an hour a day. I have no plans to join Facebook or anything else. And I will only blog if I’m part of a large pack of people. Because at the end of the day, I still believe that the Internet is a time suck. Slup. Slup. Slup. (That’s the sound of my writing time getting sucked away while I write this blog post.)

Thanks for reading! And for your viewing pleasure, I have attached my teen shark novel cover. SHARKS & BOYS comes out summer 2011. Chomp! 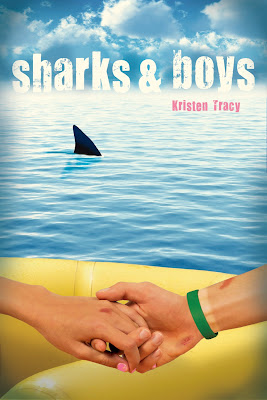