Nina: Behind the Scenes of a Book Trailer

I don't know about you guys, but I find the few months leading up to a novel's release a little paralyzing. There's that space between when ARCs are printed and when the reviews start coming in, and that space is so quiet. I start doing all the things I shouldn't: reading Goodreads, obsessively refreshing my email for any trace of news, checking on Amazon to see if there have been pre-orders. It doesn't feel good. So when the lovely online content manager at Penguin told me that they wanted to hire me to make the trailer for my second novel, The Disenchantments, I was thrilled: not only would I get to have creative control in the process, but I would also have a project to distract me from the pub day countdown.

To provide a little context, a few years ago, my wife Kristyn Stroble and my BFF Amanda Krampf and I made a trailer for my first novel, Hold Still. We filmed it at my old high school, using my mom's photography students as actors. We used a Super 8 camera and the teenagers wore their own clothes and we didn't have a script or much of an idea of what we'd do, but we had so much fun and we put our hearts into it and it ended up becoming something that people really responded to. So, that's what Penguin was thinking of when they told me I could have the first shot at making The Disenchantments' trailer. Penguin gave us the copy and the concept and then set us free to make it happen.

Kristyn, Amanda, and I went to work on our new project, first searching for the right Colby and Bev. We were so fortunate to find Shelbie Dimond who is so gorgeous and intriguing that I didn't even care about the length of her hair, which is supposed to be much shorter in the novel. Next, through our brilliant stylists Oak & Roma, we found Brandon Heiman who was so charming and perfect in every scene we shot.
Finding Meg and Alexa was a little easier. Vanina Howan and Kate Capurso used to go to the high school where I teach part time, and I was so happy that they both wanted to be in the trailer. The most difficult part of the entire trailer was figuring out Meg's hair. In the book, it's supposed to be all pink, but even after trying three different wigs of various shades of pink, it wasn't looking right on camera, so we went with pink extensions in a light brown wig instead.

After the casting was complete, we began scouting for locations and props. Miraculously, Kate's dad owns a blue VW like the one in the novel. It wouldn't start, so we all had to push it into the street and then back into the narrow garage after we got the footage we needed.

The Phoenix Hotel in San Francisco was a dream location with its blue and yellow doors, bright bedspreads, dynamic outdoor spaces, and rich musical history. (Joan Jett has stayed there, which felt especially fitting considering that the epigraph of the novel is a Runaways lyric!) 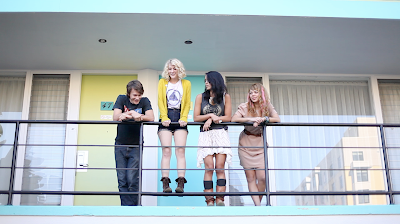 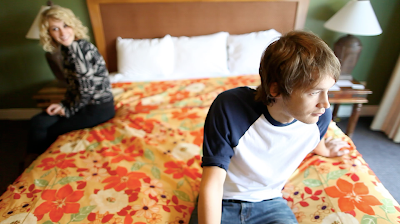 One thing we couldn't film at the Phoenix was the band onstage, so after our day of shooting there, we crossed the city to Amanda's apartment, which, lucky for us, has a storefront-turned-living room with a raised floor under the front windows that worked perfectly as a little stage.

Oak&Roma, the super creative and talented sibling duo, made everyone look fabulous all day and night. I love what they did here with red, white, and black:

My favorite moment came at the end of the night, when we decided we needed more romantic footage of Colby and Bev. We had gotten a lot of arguing, a lot of aloofness, a lot of laughter, but not enough dreaminess. So we asked Shelbie and Brandon to lie on a rug and almost kiss. (They're both in relationships, and not with each other, so almost was the key word.) Kristyn tried a bunch of camera angles, and finally resorted to the one below.

It was late at night; we were all starving; the lights were hot; the positions were awkward--but it all lead to my favorite footage of the entire shoot. Isn't it beautiful?
By the end of the shoot, we were in love with the process, and in the time that followed that, when we were choosing the music and editing the trailer down to the thirty second limit required for ads, we were so consumed by what we were doing that I hardly checked Goodreads or Amazon at all. (Well, maybe that's an overstatement, but I definitely checked them less.)


I'll leave you all with the final product: days and days of planning, two full days of shooting, distilled to thirty seconds. It features a song I love, "Alright You Restless" by AgesandAges.

Also, we've been bitten by the book trailer bug. If you like our work, please get in touch!
lessthanperfectproductions@gmail.com