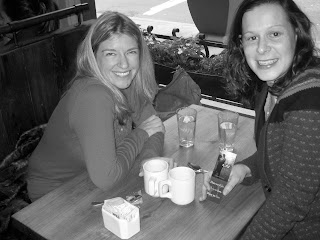 Don't get me wrong, I haven't always loved New York. My husband (rather the medical school placement people) dragged me biting and scratching from my peaceful beach life happiness in Santa Cruz back in 1998 to a slanted floored apartment along the Hudson where we lived above a Chinese restaurant. Said slanted floors were also adorned in blue-carpet so short it looked like a putting green. A lopsided putting green. But blue. So I had this mopey life of a sad fiance' who had her perfect life stolen from her back home. But there was one thing New York had that California didn't. PUBLISHING. I was a theatre director and wrote my own plays back in Santa Cruz and I had started a middle grade novel about a haunted children's theatre. It was sort of Goosebumps meet Judy Blume and wasn't half-bad. So I figured: Now I'm in New York. I shall publish it immediately! I'll never have to get a job! So I queried some editors (hadn't yet heard of that whole 'agent' thing yet) and miraculously I got a response that someone--a Big Giant Someone--wanted a whole. So I got all dressed up and with my visiting sister on hand we tootled our way into the city on the train and hand-delivered said manuscript to Big Giant Publishing House. I'm sure the security guard must have thought we were crazy stalkers or something. But it was awesome. I felt so writerly. So sure they would offer me millions of dollars and moving to New York wouldn't have been solely to support my fiance' (now darling husband) as he studied for 23.5 hours a day and cutting up dead bodies.
But it didn't *quite* work out that way.
I ended up working at a nursing home as an activities girl teaching the octogenarian set the YMCA (fun) and as a costume girl at a costume shop dressing up theatre and Halloween people in festive wear (even more fun) and then, finally, I applied to graduate school at the New School because of an ad like this:
Live the writers life in Greenwich Village! 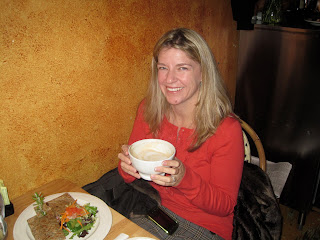 (I'm very susceptible to advertising)
Suddenly it was me! Berets! Writing friends! Cafes!
But then, really. It wasn't.
It was school. And it was awesome, but I was working three jobs and commuting two nights a week via rail getting my debit card rejected at grocery stores because we were so broke.
Fast forward ten years and many drawer novels and lots of pain and suffering and AHA! moments and I am now an *almost* published writer!
My novel is coming out in June!
I can say I'm a writer without people rolling their eyes and snuffing, "Sure ya're."
I flew to New York first and foremost to meet Sara and my editor Stacey before SEA came out. My perfect excuse was a friends' signing at Books of Wonder. You can read all about that and seeing Jude Law (YES that Jude Law) perform Hamlet back on my personal blog: http://seaheidi.livejournal.com/165661.html (Yes, the trip is in 6 parts. It was that fun.)
But meeting Sara and Stacey in real life was simply amazing. 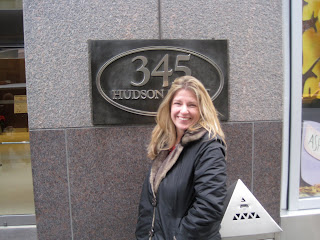 For one thing, they are both exactly how I thought they would be but better! AND they both made sure wimpy California girl me got to where I needed to go. (Sara walked me to Putnam after our lovely cafe' lunch and Stacey waited in the freezing helping me hail a cab.) Penguin was fantastic. It was late afternoon so there wasn't a ton of action going on, but I got to see Stacey's beautiful, water-overlooking office AND sign ARCs and bookmarks! 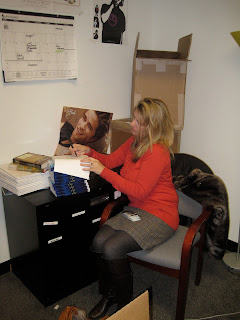 Afterwards, I hopped into a cab (the one Stacey helped me find) and headed to Books of Wonder for the holiday party. I came as a guest of a couple friends (one who was on a plane heading to NY, funny) and a couple who were there in the flesh. It was such a publishing scene. So many people I recognized in the business. Writers I knew from live journal or Twitter. And the lovely Gayle Forman who my friend Courtney told me I Just Must Meet. Barry Lyga and Jon Skovron were my wing men (Barry's going to die when he reads that) and it was just The Writerly Dream Come True.

The next morning I flew away with a tear in my eye—so happy I finally met the NYC I'd always hoped to know.

Happy Holidays, everybody!
Posted by Heidi R. Kling at 10:00 PM