When beta-readers told me the main character of my WIP seemed older than his 17 years, I was worried. “What gave you that impression?” I asked, hoping it was fixable. “Is it his voice, his behavior, his attitude?”

And I didn’t know what to say to that. In 1908, it would have been strange if my 17 year-old protagonist didn’t have a job.

For me, the most challenging aspect of writing historical YA is that the target audience doesn’t exist in my settings. Modern teenagers, whose days revolve around high school and their social lives, evolved only in the last half of the 20th century. Before that, Young Adults were … well, young adults. They had jobs and adult worries. They married young—and girls often married older men. (Not 100 year-old vampires who look like teens, but twenty-something frontiersmen and thirty-something explorers!) 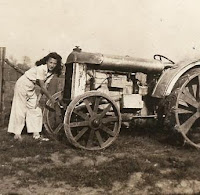 How quickly we forget the way it was! Only one of my grandparents graduated from high school. The others had to work in their family businesses or raise their younger siblings. The one who graduated did so because she was the youngest in her family and her older siblings had already quit school to run the farm. Their sacrifices allowed their little sister the luxury of an education – and that’s what education was in those days, a luxury.

Of course, entering the workforce was often the cusp of a grand adventure. Harry Houdini quit school at 12 to get a job; so did Thomas Edison.

And they weren’t alone. Boys built the transcontinental railroad and the Empire State Building. Girls fought off wild animals with a rifle, defended the homestead, and one really talented gal became the most famous sharpshooter in the world! If you want to go back a little further in time, teenagers led armies (think Joan and Alexander) and ruled empires (Nefertiti and Amenhotep).

I keep hearing that historical fiction is a hard sell with teens. Yet the growing popularity of science fiction and dystopian fiction tells me YA readers are looking to break out of a world defined by school and social cliques. They want to expand their horizons, explore their destinies, lead revolutions -- and save the world.

As a YA historical writer, I hope to prove they can look backward as well as forward for their inspiration.
Posted by Dianne K. Salerni at 3:00 AM