Michael: Raise the Woof: Underdogs in YA

I stayed at a bar and listened to “Live Irish Music!” last night. You know why? Because no one else was. The musicians outnumbered the listeners, and I felt a little bad for those forlorn fiddlers. It got me thinking of the importance of underdogs, not so much in bars (though, please note, I can now write-off that trip) as in young adult literature.

There may be no other type of writing where the underdog is more common and more important, because in one way or another, almost every main character in YA is one. No matter how confident and competent they are, they are still teens living in an adult world—and possibly vampires living in a human world, wizards living in a muggle world, delicious, delicious humans living in a zombie world, or something else, but let’s stick with that first one for now.

And of course many of these characters are much less than completely confident and, in terms of competence, are at least as much MacGruber as MacGyver. The main characters in my first book, Gentlemen, are classic underdogs: They are lower-class kids from broken homes, remedial students, and they definitely have a tendency to bite. The narrator of Trapped, on the other hand, is basically an average kid—a good athlete and a decent student—but he’s at least as much of an underdog. 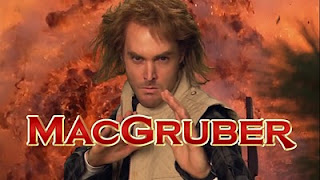 What makes him one is the weeklong blizzard that strands him and six other kids at their high school. Frankly, he could be the love child of Jack Bauer and La Femme Nikita and still be an underdog in that situation. All sorts of obstacles conspire to stack the odds and make characters sympathetic in YA, whether it’s being the new kid in town or subject to the machinations of a hellish dystopian society.

But the biggest obstacle remains adolescence itself. It is a confusing age, and it definitely doesn’t seem to be getting any less so. (Thanks a lot, global political/economic/cultural/technological upheaval.) The characters are sympathetic because they are going through the same things the readers are (or were). They are misunderstood, uncertain, disrespected (it’s right there in the word “minors”), and liable to be ignored on the one hand or to attract the wrong kind of attention on the other.

If you write YA, whether you intended it or not, your main character is probably an underdog. Of course, that’s true of many types of books. What’s remarkable about YA is that, if you look closely, the bullies, jocks, rivals, crushes, exes, friends, and enemies who round out the cast are probably underdogs too.
Posted by Michael Northrop at 8:12 AM