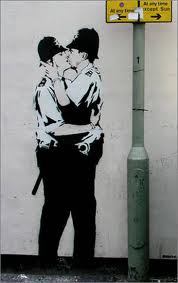 Hi all, thought I'd take this chance to share a recent inspiration. Have you guys seen Banksy's Oscar-nominated documentary Exit Through the Gift Shop? If not, I highly recommend it. As soon as it was over there was nothing I wanted to do more than grab my laptop and get back to my revision. Gotta love a piece of art that can do that.

For those who haven't heard about it, Exit Through the Gift Shop follows filmmaker Thierry Guetta as he shadows street artists like Shepard Fairey, Space Invader and Banksy to record their work and methods. These are all artists who work (for the most part) outside the usual art world of museums, galleries and auctions and focus on putting their art out in public spaces, generally without permission. The work consists of spray painted graffiti, wheat pasted prints, stickers, mosaics, etc. and runs the gamut from the aggressively political to the surreal and whimsical. (For a good street art gallery check out Streetsy. For a look at Banksy's work go here. )

There's alot to like here. First, you get an exciting peek at these artist's processes as they dart around cities trying to put up pieces of art while staying one step ahead of the police. There's something incredibly pure about it all. These are artists doing what they do not because they lust for money and fame (few get either) but because they love what they do and they want people to see it. They're incredibly talented people that simply want to communicate with, challenge or delight groups of total strangers for the short period of time before the authorities appear and remove their work.

Now, I know that this has been said many times before, but heck, I for one can always use reminding...as a writer it's easy to get caught up in advances and bestseller lists and prizes and reviews and who's got the mos twitter followers and blog followers and facebook friends. Happens to me all the time. And I'm not saying that all of that stuff isn't important in its way, it's just great to see a movie like this and be reminded that the focus should be as simple as making something that you think is cool and getting it in front of others in hopes they'll think it's cool too. Everything else is secondary. This is a point the later half of the movie drives home pretty hard when it goes into great detail about what happens when an artist puts commerce way ahead of the work. Scary stuff.

Have you guys seen the movie? What did you think? Any thoughts on the "is it all a prank?" questions surrounding the film?
Posted by Jeff Hirsch at 7:32 AM